When Ernie Chambers sued God in 2008, he was not the first to have sued the supernatural being but his suit made headlines. 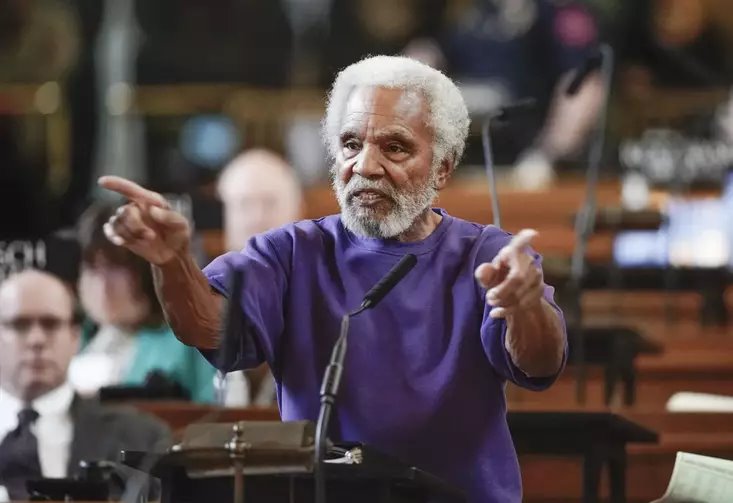 When Ernie Chambers sued God in 2008, he was not the first to have sued the supernatural being but his suit made headlines.

A year earlier, Chambers, then the longest-serving, and perhaps the most powerful senator in Nebraska history, sought a permanent injunction against God, ordering the immortal defendant to cease certain harmful activities and terrorist threats.

Chambers indicated that he tried to alert God of the impending lawsuit by shouting, “Come out, come out, wherever you are.”

He, however, did not get the Almighty’s attention.

Absurd as the lawsuit was, Chambers and God got their day in court in August 2008 with “an empty table reserved for God and God’s attorney,” according to the Associated Press.

Nebraska Judge Marlon Polk presided over the matter that was brought before his courtroom that day: the lawsuit of state Senator Ernie Chambers vs. God.

As expected, Judge Polk threw out Chamber’s case because God’s home address was unlisted and hence he couldn’t be properly served.

“Given that this court finds that there can never be service effectuated on the named defendant this action will be dismissed with prejudice,” Judge Polk wrote in his four-page order.

Chambers argued by saying that “The court itself acknowledges the existence of God. A consequence of that acknowledgment is a recognition of God’s omniscience. Since God knows everything, God has notice of this lawsuit.”

But the judge still dismissed the suit, stressing that a plaintiff must have access to the defendant for a lawsuit to move forward.

It later emerged that Chambers, who graduated from law school but never took the bar exam, was not actually seeking to win a suit against God in court.

His major goal was to protest the restriction of lawsuits deemed frivolous and to ensure the courts are open to anyone, whether rich or poor.

Before Chamber’s lawsuit, a sexual assault case saw a district judge barring the use of words such as “rape” or “victim” during the trial.

The accuser in the case sued the judge, claiming that he violated her rights to free speech. But a federal judge ruled that the lawsuit was legally frivolous.

This suit triggered Chamber’s, who argued that by suing God, he was only trying to make a statement that a court should be required to hear a case irrespective of how frivolous it might be.

“The Constitution requires that the courthouse doors be open,” he said, “so you cannot prohibit the filing of suits. Anyone can sue anyone they choose, even God.”

The eccentric lawmaker, who skips morning prayers during the legislative session and often criticizes Christians, is noted for some antics.

Chambers sparked controversy when he compared U.S. police officers to ISIS during a hearing on a concealed-gun bill and shuns suits for T-shirts during legislative sessions.

But his major political achievement may be his four-decade push to end the death penalty in his state.

Read the Original Article on Face2FaceAfrica

How to Maintain a Long Lasting Sexual Relationship