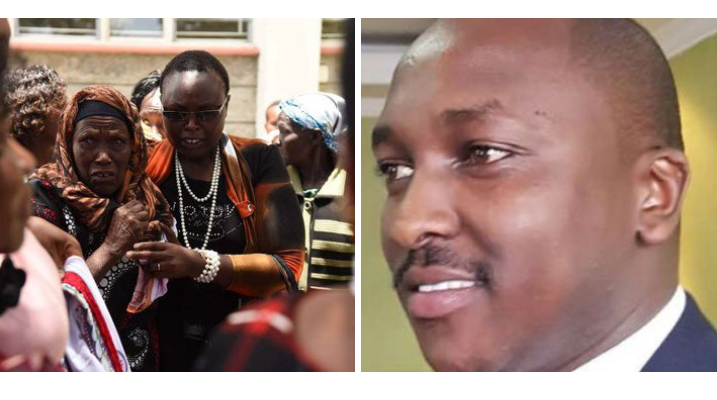 Detectives believe he was murdered as he was to record a statement crucial to investigations into a fake Sh40 billion military equipment deal involving former Sports Cabinet Secretary Rashid Echesa.

Speaking to reporters after viewing his son’s body at Umash Funeral Home in Nakuru town on Friday, John Chesang said the family is waiting for release of the data as they believe there is crucial information about what transpired before he was found dead in his house in Imara Daima, Nairobi, on February 20.

He said the information may also provide leads on those who planned the killing.

He noted, however, that the post-mortem report the family received cannot be used on its own to find those who killed his fourth born son.

At a lengthy press conference on Thursday, Mr Kinoti also played CCTV footage on events at the DP’s office as Mr Echesa and others met over the deal.

Mr Chesang said, “We are happy that the DCI showed Kenyans what transpired in that office.”

But he added, “What we want to know are the contents of the data recovered from his phone. Let that data be made public the same way they revealed what happened at the DP’s office.

“We want the data made public because we believe it shall enhance investigations and perhaps [reveal] how the mission to eliminate him was planned.”

Mr Chesang further told journalists that the family hopes those who killed Kenei will have been arrested before his burial.

“If one or two people are arrested before his burial … it will be a relief for the family.”

Kenei’s father said the family believes the government is investigating the matter alongside all relevant agencies.

“When his phone was finally unlocked, we had hopes that investigations would go on well to nail his killers. We don’t want anything hidden. We are asking the government to pursue all the relevant angles and make sure justice is served for my son,” he said.

Family and friends started gathering at the mortuary from 9 am to view Kenei’s body.

The body arrived at about noon, having been transported from Chiromo Mortuary in Nairobi.

Kenei’s widow Judy Kipsoi was overwhelmed after viewing the body for the first time.

“What will will I tell my children when they grow up? Who will help me in raising them? It’s hard for me to believe he is dead but I leave it to God [sic],” she said.

Mourners viewed the body for about an hour before it was returned to the morgue. The family held a short service afterwards.

Back at the village in Chemasis sub-location, chief Samuel Totola said about 5,000 mourners will attend Kenei’s burial on Saturday.