REVEALED:Orengo Explains how he will successfully Impeach DP Ruto

PoliticsTrending News
By Correspondent On Mar 8, 2020 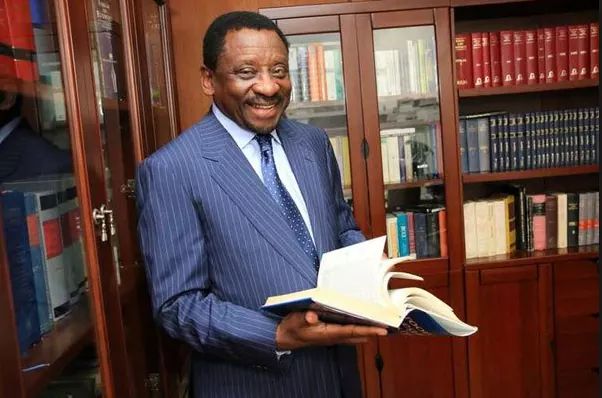 They said the incidents, which have seen the Directorate of Criminal Investigations (DCI) investigate people including former Sports minister Rashid Echesa, have brought the DP’s office into disrepute.

In two weeks we will start the process that will see us deal with him,” he said in Siaya at the funerals of University of Nairobi’s Prof Gilbert Ogutu and politician Omolo Rading’s son.

The ODM brigade also piled pressure on the DP, saying he should reveal what he knows about Sergeant Kipyegon Kenei.

Kenei, the head of security at the DP’s office at the Harambee House Annex, was found dead on February 20, just as he prepared to record a statement on the deal at the DCI.

DCI boss George Kinoti said he was murdered and the scene at his home in Imara Daima, Nairobi, staged so it would seem he committed suicide.

The MPs asked DCI director George Kinoti to consider instituting criminal investigations against the DP, saying the statements he has been issuing are akin to interference with the probe.

Mr Orengo, who led the onslaught against the DP, said the statements are sufficient grounds for an investigation.

The leaders noted that the DP’s office, unlike the President’s, does not enjoy immunity and is therefore not protected against investigations and prosecutions.

“It seems the DP occupied his office without fully understanding the provisions of the law. I hope he is being investigated because what we have on record now is sufficient to institute investigations against him,” the senator said, adding that nothing stops investigating agencies from initiating a legal process against him.

“The DP is exhibiting a degree of ignorance by making careless utterances and comments on the probe, which is unbelievable,” he said.

Mr Orengo said the DCI should not be discredited while discharging its constitutional mandate and wondered why the DP and his associates always seem to have problems with Mr Kinoti.

He asked Dr Ruto to let the DCI boss investigate the arms deal and the murder to their conclusions.

Mr Orengo also asked the Deputy President to stop derailing the constitutional review process by linking it to the 2022 general election.

“The system is yet to be mobilised against you. You will feel the heat if the state begins mobilising its apparatus to deal with you. We have been there; we know what it feels like,” he said.

“Kenyans want the law changed but we can’t talk about amending the law and at the same time talk about an election. The two are mutually exclusive,” he added.

He accused the DP of knowing the criminals but feigning ignorance.

“The crime was committed right at your premises by your officers and your friend Echesa. The conclusion is that you know what happened,” he said.

The MP claimed those who plotted to sneak arms into the country intended to use them during the next poll.

“We are worried that these people may have hatched a plot to smuggle arms into the country so that they can use the arsenal to ensure the person who is elected does not occupy office,” he said.

“Someone was organising for an arsenal to destabilise whoever wins the next election after sensing he might lose,” he said, further wondering where those behind the scheme would have stored them.

He asked the DCI to “thoroughly investigate this serious issue”.

In his address, Kisumu Governor Anyang Nyong’o asked the DP to stop contradicting the DCI boss and allow him to give Kenyans updates on the probe without condemnation.

The governor said Mr Kinoti did nothing wrong by giving an update to the public and noted that Kenei’s family has not complained.

“The government must be transparent because Kenyans are entitled to information,” he said.

“Why is it that one corner of the country, especially people allied to Dr Ruto, always appears to have problem with the work of the DCI? The guilty ones are always afraid.”

“Nobody is above the law. The late Kenei was a Kenyan who deserves justice,” he said.

Mr Mudavadi said the country must redeem itself from a culture of killings that are not followed by complete investigations and the arrest and punishment of offenders.

“Not long ago, Chris Msando was killed and to date nobody has been prosecuted for his death. We want the Building Bridges Initiative to help us with such issues so that affected families can have closure,” he said.

In a statement on Thursday, Dr Ruto insisted on a thorough investigation into the killing, noting that police officers who allowed Mr Echesa and other people into his office breached security.

DP Ruto termed the access to his office fraudulent and said it was by “crooks and cartels” who must be punished.

He also asked anyone with helpful information to give it to detectives.

Dr Ruto has also said that when Kenei failed to show up at the DCI to record the statement, his office reported his absence to the authorities.

He said the policeman’s absence from work the next day was also reported.

Soon after Kenei was found dead in his house in Imara Daima, Nairobi, on February 20, Dr Ruto said the probe should be extended to other government offices.

At Kenei’s funeral on Saturday, the DP said the arms scam and the murder were part of an elaborate scheme to ruin his political career.

He noted, however, that he will not be scared and that he will confront those targeting him and planning his downfall.