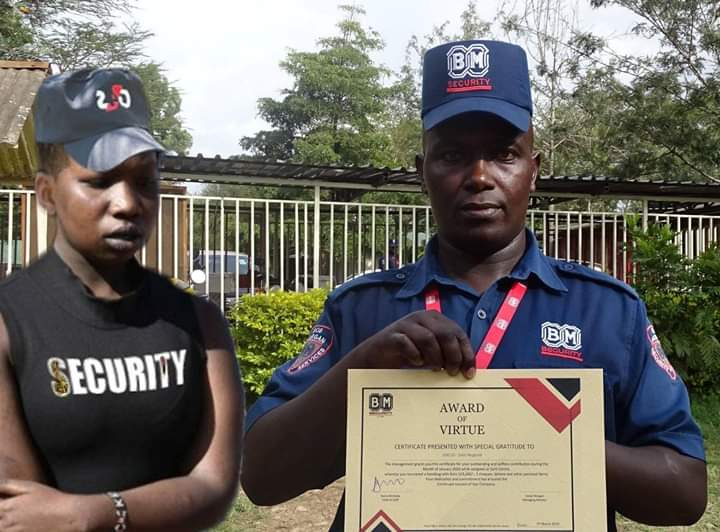 A security guard left many Kenyans impressed after he recovered and returned a lost bag containing several valuable items.

The bag belonged to a woman who had in January visited Sarit Centre, a shopping mall in Nairobi’s Westlands area where Mougendi is stationed.

The security firm he works for, BM Security, rewarded Mugendi for his actions with a Certificate titled ‘Award of Virtue’ on Tuesday, March 17.

“Our employees are the embodiment of integrity and professionalism. John Mugendi recovered a handbag containing Kshs.103,260, 3 cheques, iPhone and other personal items misplaced by a client.

“We celebrate you for upholding our core value of honesty and integrity. Kudos,” the firm wrote on social media.

Left in awe by Mugendi’s action, Kenyans were quick to honor Mugendi whom they praised for his virtue.

“He is one of the best guards I have come across. He is at Sarit Centre Karuna Road parking. One time I left my car window open and he looked after my car throughout.. He is very friendly too!” wrote Rasika Mhajan, recounting a past experience with the guard.

“Bravo comrade that is a way of to be honest and a trustworthy officer, God bless you,” shared Elijah Kirui.

“Congratulations bro, God will always reward you and you will count more blessings before the end of the year,” shared Lawrence Nyeris.

The conversation around Mugendi revived the debate on whether private security guards in the country should be armed as they encounter high-risk situations every day.

In July 2019, new regulations adopted by the government had seen guards given powers to carry guns and arrest citizens.

The proposals, however, have not yet been implemented with legal challenges and questions on public participation stalling the process.