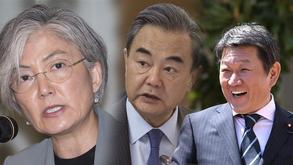 BEIJING – A special meeting via video conference on COVID-19 was held Friday among the foreign ministers of China, Japan and the Republic of Korea (ROK).

Wang said the holding of the special meeting via video conference demonstrated the firm determination of the three countries to join hands to overcome difficulties in the face of major challenges, and the countries’ willingness to work together to fight the epidemic and maintain normal exchanges and cooperation.

Faced with the outbreak, China, Japan and ROK have helped each other during testing times, writing a moving chapter of “Though miles apart, we are under the same sky”, Wang said

Noting that ROK and Japan offered their help to China as soon as possible in the beginning of the outbreak, Wang said the Chinese government and people, reciprocating this kindness, also provided the utmost assistance and support to their neighbors.

Citing China, Japan and the ROK as close neighbors linked by the sea, with deeply intertwined interests and close people-to-people exchanges, Wang said strengthening cooperation and tiding over difficulties together was an inevitable choice for the three countries.

China looked forward to sharing its experience in fighting the epidemic with ROK and Japan through this meeting, strengthening policy communication and reaching a valuable consensus on cooperation, he added.