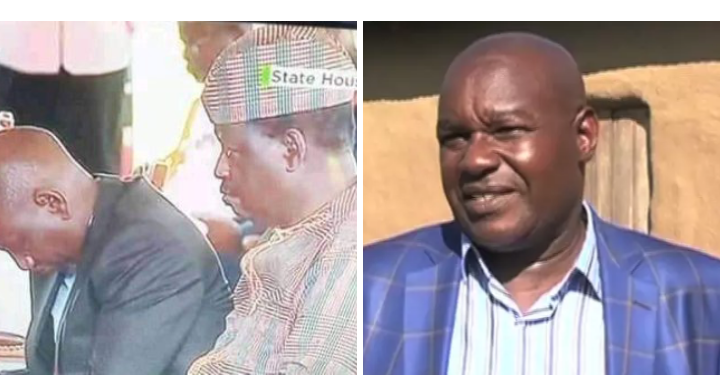 The Orange Democratic Movement (ODM) leader is among leaders who were hosted by President Uhuru Kenyatta for prayers, a function that was also attended by members of the clergy.

However, he did not remove his cap all through the service, as the other leaders and preachers led the nation in pleading for God’s mercy amid the outbreak of the deadly Covid-19 in Kenya.

In a tweet hours later, Kositany, a close ally of Raila’s main critic and Deputy President William Ruto, quoted a bible verse which directs people to remove caps when before God, suggesting that he went against it.

According to him, the present leaders should have reminded the leader to adhere to this order. Ironically, Raila was sited next to Ruto, who is known for his strong religious beliefs, but he too did not help.

“1st Corinthians 11.vs 7. A man should not wear anything on his head when worshipping,for a man is made in God’s image and reflects God’s glory. The religious leaders present should have told Raila to remove his hat,” he wrote. Raila also did not shut his eyes as other leaders presented themselves before God, an event that was also attended by among others, ANC leader Musalia Mudavadi.

As a result, social media platforms were awash with criticisms from users, who began bashing him as soon as he arrived at the function, as the meeting was aired live on most of the leading television stations.

Also present was COTU Secretary General Francis Atwoli and Speakers of both houses; Kenneth Lusaka (Senate) and Justin Muturi of the National Assembly.

At the function, the president faulted those who have been pouring cold water on his prayer requests, admitting being aware that some Kenyans are of the idea that Kenya needs a scientific intervention instead.

In his speech, he noted that though the opinion is right, science can only succeed with God’s approval, as he urged Kenyans to continue praying for the country so that it gets out of the crisis in one piece. Kenya has so far recorded only seven infections, with no death having been reported yet. As a result, the government has urged Kenyans to observe social distancing and cleanliness to prevent more cases from occurring.

However, this directive is yet to be fully complied with in some parts of the country, especially the Western region, where until on Saturday, people were still converging to carry out funeral services.

1st corinthians 11.vs 7. A man should not wear anything on his head when worshipping,for a man is made in God's image and reflects God's glory.
The religious leaders present should have told Raila to remove his hat. pic.twitter.com/HYlid6NRU5

REVEALED:Raila among top politicians under quarantine, came in contact with Kilifi deputy governor