CountiesTrending News
By Correspondent On Apr 6, 2020 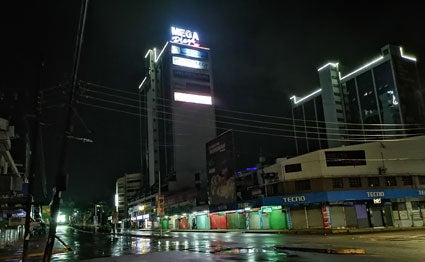 The Luo community believes that certain diseases are brought by evil spirits.

They have devised ways of exorcising the evil spirits known as Nyawawa. ‘Nyawawa are believed to be spirits of people who died in Lake Victoria.

The tradition of expelling the spirits has been observed by the community for ages and on Friday, not even the nationwide curfew could keep Kisumu residents in their houses.

It is claimed that one can hear the voices of their dead relatives passing by their homes sometimes chatting, singing and even chanting dirges in the dead of the night.

There is a belief among the Luo that when ‘Nyawawa’ visit a place, they can only be sent away by repeatedly hitting objects like iron sheets, tins, drums and even cooking utensils.

They believe that failure to expel the spirits can attract various calamities, including epidemics or even death.

So this was the case on Friday, shortly after 9pm two hours into the dusk to dawn curfew.

Not taking chances, residents of Obunga, Kajulu, Mamboleo, Bandani, were heard hitting and drumming different metallic objects to ‘drive away’ the evil spirits that passed by their homes in defiance of the curfew.

Another Luo elder Odungi Randa said the Friday incident reminded him of incidences that used to happen when he was young.

Hiring medics in Covid-19 fight delayed
Accident scene near Salama township
Two killed after trucks collide
President Uhuru Kenyatta
AU leaders discuss ways to fight virus
Toxic jab victims get Sh42m – VIDEO
He said when there was an outbreak of smallpox, the Luo community treated it as satanic and used to hit metal objects including utensils and drums to send the evil spirits back to Lake Victoria.

He told Nation that they used to smear some concoction on their doors for protection against the disease.

“Just like the curfew, everyone would come home by 5pm and the gates would be closed before the doors were smeared with herbs,” said Mr Randa.

He indicated that the ritual continued until the modern medicine for smallpox was brought by the whites.

“When I heard my neighbours scare away Nyawawa on Friday night, I remembered how we used to drive away smallpox, but this is not the same for coronavirus. We have to follow what the government is telling us and maintain high level of hygiene to beat it,” said Mr Randa.

There is speculation that the Kisumu residents may have done this to drive away Covid-19.

6-Yr-old Boy who succumbed to Coronavirus may have exposed many to the virus, doctors say