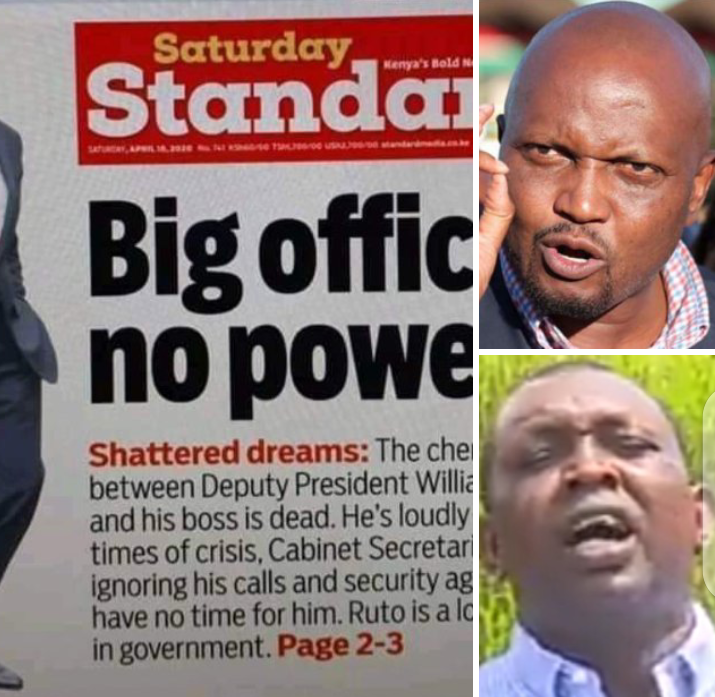 Angry Mps allied to DP Ruto’s Tangatanga movement have pointed accusing fingers to Standard Newspaper for carrying a headline that they claim is biased and meant to undermine the office of the Deputy President William Ruto.

Kuria however told the paper that they were not going to bring down the DP but instead will even earn him more sympathy and in return they will commercial loses amounting to Sh 3million daily for running DP’s adverts daily on their paper.

He sarcastically accused the newspaper of having a big office power but lacking the essential component ; the brains.

This comes after Saturday Standard’s Headline made circulated in social media.

Their main headline; Big Office ,no power, which carries a story on how the DP’s dream have been shattered seem to have irked many of the DP’s supporters.

The headline also goes ahead to explain how the chemistry between the DP and his boss is dead.

The headline also accuses the DP is being loudly absent in times of crisis adding that cabinet secretaries are also ignoring his calls.

According to the headline Ruto is now a lone man whom even security agencies have no time for.

DP allies have constantly accused Standard Newspaper for always carrying headlines and stories meant to undermine the him.

They claim Gideon Moi is behind the attacks calling him to come clean and avoid hiding behind the newspaper.

How did Marcus Garvey organize and mobilize millions of people of African descent worldwide with no internet?