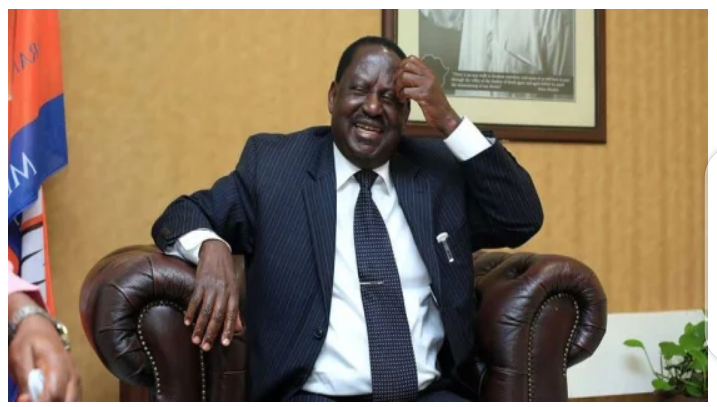 Treasury has allocated Ksh72m to the office of former Prime Minister Raila Odinga.

The move comes barely days after treasury withdrawn Sh1.5 billion that had been set aside for the retirement benefits of former Prime Minister Raila Odinga and retired Vice-Presidents, including Kalonzo Musyoka, in the review of the budget following the Coronavirus crisis.

ODM leader Raila Odinga will now have part of his expenses paid for by taxpayers after the National Treasury allocated his office Sh72 million.

The allocation is to the office of the former Prime Minister.

However, Raila alongside ex-Vice President Kalonzo Musyoka will wait longer for their lucrative pension benefits after the government froze Sh1.5 billion budget that had been allocated.

The cash was also meant to carter for other former state officers including former National Assembly speakers, chief justices and their deputies as well vice-presidents.

Despite the tough times, Treasury boss Ukur Yatani has not left Raila empty-handed.

Raila’s office will be entitled to Sh10 million for his employees’ wages.

He will get Sh20 million for insurance cover and another Sh26 million for purchase of vehicles and other transport equipment.

Raila has been allocated Sh10 million to purchase office furniture and general equipment and will have his cars maintained at Sh4.2 million.

He is also due to get fuel – including oil and lubricants – at Sh1.5 million.

Since leaving office in 2013, Raila has fought for his retirement benefits without success while his then co-principal, President Mwai Kibaki, enjoyed lucrative benefits.

Kibaki has been receiving about Sh3 million monthly in pension and nearly all his bills, including medical expenses, catered for by the state.

This is the first time the former Prime Minister’s office is being allocated funds since President Uhuru Kenyatta’s administration took over.

Initially, Uhuru and his allies insisted that Raila and Kalonzo had to hang up their political boots to enjoy the retirement benefits.

The perks were yet to be affected even after the Opposition leader joined hands with President Kenyatta following their March 9, 2018 handshake.

Apart from being former PM, Raila’s activities have lately sparked speculation that he could be having some informal role in government. He has denied the claims.

But for the better part of 2019 and this year – before the Covid-19 pandemic struck and rendered meetings impossible – the ODM boss had been hosting powerful delegations at his Capitol Hill office.

Cabinet and Principal Secretaries, governors, heads of state departments and political leaders had been trooping there regularly in what was seen as a display of the March 9, 2018 handshake influence.

“I directed the county government to fully support the metropolitan services team to enable it deliver where the county had failed,” he tweeted.

It is not clear whether the allocation to his office affects funds that may have been initially allocated to Kalonzo Musyoka.

Allocations for the former VP’s domestic travel, subsistence and other costs is set to be reduced to Sh628,000 from Sh1 million.

The Treasury CS by press time was yet to comment on whether the former VP had been receiving his retirement benefits as stated in the supplementary estimates.

The late President Daniel Moi’s allocations for domestic travel will also be cut by over half a million of the Sh3.2 million.

The National Treasury seeks to remove allocations to President Jomo Kenyatta whose office was allocated Sh25 million in the approved 2019-20 estimates.

The money was meant for the purchase of vehicles and other transport equipment; another Sh160,000 for training expenses will be cut.

Even so, the office is left with Sh2.8 million for domestic travel, subsistence and other transportation costs.

The Budget and Appropriations Committee of the National Assembly yesterday began a review of the supplementary estimates.

The committee chaired by Kikuyu MP Kimani Ichung’wa is expected to table a report on Wednesday.

In June 2015, President Kenyatta wrote to Parliament asking it to cut Raila and Kalonzo’s retirement perks.

This resulted in amendments to the Retirement Benefits (Deputy President and Designated State Officers) Act, 2015.

A clause was introduced stating that retired state officers should not be given their perks when still active in politics.

It also cited removal from office for violating the Constitution and conviction for an offence among the grounds.

This meant that for Raila and Kalonzo to enjoy the perks they had to quit politics. The Opposition went to court after MPs amended the Act.

The High Court ruled that the amendment was unconstitutional; adding that facilities provided for the state officers cannot be varied during their lifetime.

The budget realignment followed directives by President Kenyatta in measures to raise cash to cushion Kenyans from the Covid-19 pandemic.

DP William Ruto’s office budget has been reduced by Sh32 million – basic salaries and travel, while the PSCU will have to make do without Sh3.9 million.

The estimates show that the government intends to reduce development spending by Sh98.7 billion amid uncertainty of meeting donor targets.

There will, however, be an increase in recurrent spending by Sh30 billion in the adjustments affecting the Executive, Judiciary, Parliament and Commissions.

Treasury records show the Interior Ministry is keen on rolling out Huduma Namba despite the odds set by the pandemic with an increase of Sh242 million.

County commissioners and other administrative units face cuts in allowances for personnel at Sh1.6 billion.

Allowances for the Cabinet Secretariat staff have also been reduced, a situation that is prevalent in the ministries.

Among the reduced recurrent expenses is Sh4.6 billion for the government vehicles leasing programme.

Yatani also seeks to reduce funding for MPs’ foreign trips by Sh157 million with allowances slashed by over Sh780 million.

There will be little money for tea and other hospitality treats for House visitors and staff with a proposed Sh62.8 million budget cut on such expenses.

Controller of Budget Margaret Nyakang’o will now get a car after her office was allocated Sh22 million for the purchase.

She in February told the Finance committee of the National Assembly that she lacked an official car since her predecessor Agnes Odhiambo was yet to hand over the one she was assigned.

Nyakang’o has been using an old and worn out car for official duties, a situation she says had caused her embarrassment at security checkpoints.