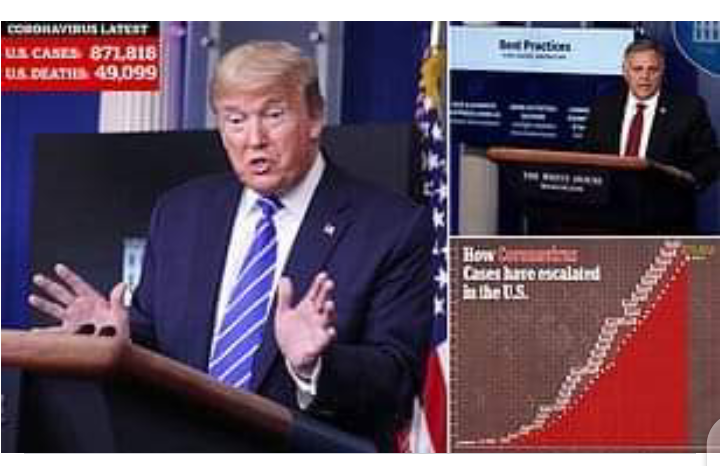 DAILY MAIL:President Donald Trump proposed unorthodox new treatments for the coronavirus at Thursday’s White House press briefing – including the use of ultraviolet rays and injections of cleaning agents into patients.

Trump, who studied finance and real estate but touts his gut instincts about medical and scientific issues, brought up possible treatments including ‘injecting’ cleaning agents in the body and use of ultraviolet lights at Thursday’s White House press briefing.

William Bryan, an acting homeland security official, briefed the president, and later reporters, about new tests that showed how increased levels of sunlight, ultraviolet rays, and even humidity caused the coronavirus to die off in a reduced period of a time – potentially stemming its potency this summer.

‘Supposing we hit the body with a tremendous, whether it’s ultraviolet or just very powerful light? And I think you said, that hasn’t been checked but you’re going to test it,’ Trump asked him Thursday evening.

Trump talks up ultraviolet light and injecting disinfectant for COVID-19

‘It sounds interesting to me,’ Trump said Thursday, telling reporters he queried an official about whether cleaning agents could be injected into patients to fight the coronavirus.

‘And then I said supposing you brought the light inside the body which you can do either through the skin or in some other way. And I think you said you’re going to test that too. Sounds interesting,’ Trump said.

Then he raised another possible treatment. ‘And then I see the disinfectant, where it knocks it out in a minute, one minute, and is there a way we can do something like that? By injection inside or almost a cleaning. As you see it gets in the lungs, and it does a tremendous number on the lungs. So it would be interesting to check that,’ Trump said.

‘So that you’re going to have to use medical doctors. But it sounds interesting to me,’ he said.

Agents that are commonly used to kill the virus in the environment, bleach and isopropyl alcohol, are both toxic to the body when ingested.