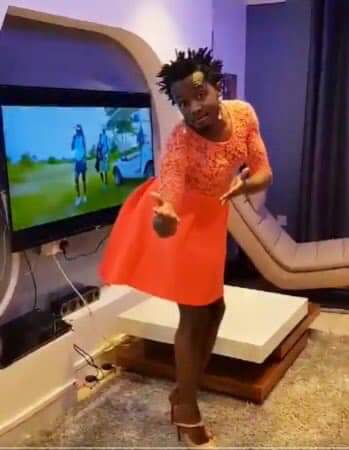 Twitter is the first thing I will If I ever become the President of Kenya, gospel artist Bahati recently told his fans on Twitter.

A week after he announced that he is shutting down his recording label, Eastlands Most Beloved (EMB), following a falling out with signed artistes, Bahati is now revealing his future plans.

On Monday afternoon, the “Unavyonipenda” artiste took to social media to tell his fans that he will one day be the President of Kenya and asked them to address him with respect.

“I will be a President of this country one day, so address me with some respect, Mr. Bahati” said Bahati.

His tweet came days after he has was the talk of t for his town for cross-dressing in an orange skater dress, complete with heels and jewelry accessories while jamming to his latest hit with Madam Boss, Akothee, Nakupa Moyo.

The self-proclaimed King of Gospel, Bahati, is among many artistes who facing Kenyans on Twitter wrath over various reasons.

“Twitter is the first thing I will burn (ban) once I’m sworn in as the President of Kenya. Aki Simnasumbua” he tweeted and pinned his post.

If you want a good laugh as you #StayHome, just go read the comments on his posts because Kenyans never lack responses.

Despite the eventful last week, the gospel singer has since released a new hit “Mwisho Wa Dunia”.