NationalPoliticsTrending News
By Correspondent On Apr 29, 2020 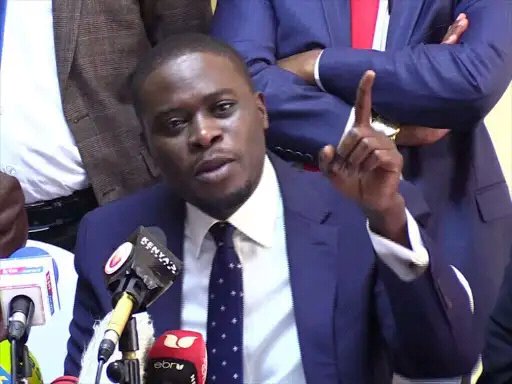 Outspoken and youthful Senator Johnstone Sakaja has confirmed his resignation from the Senate Security Committee. He served in this committee as the Vice Chairperson.

Sakaja confirmed this during senate sittings on Tuesday evening. He said that his resignation was in order for him to focus more on his new role as the chairperson in charge of the newly formed Senate Ad hock Committee on Covid-19.

“Mr. Speaker sir, let me confirm this for the sake of clearing doubt, it is indeed true that I have resigned from the Senate Security Committee. I wish to thank the members of the Committee for accepting my resignation.” Sakaja confirmed to the senators during the sitting.

Sakaja jokingly said that he had been the substantive chair of the committee for about 2yrs.This according yo Sakaja is because Senator Haji had been more preoccupied with Building Bridges Taskforce Committee where he serves as the Chairperson.

This is not the first time Sakaja has resigned from senior parliamentary positions. In June 2016, Sakaja stepped down from his position as a member of the Finance Committee in order to serve in the Budget and Appropriation Committee as well as Chair of the Joint Committee on National Cohesion and Equal Opportunities.

Most of the senators thanked Sakaja for showing political maturity and selfless leadership. They wished the youthful senator the very best in his committee since it calls for a lot of his attention considering current Covid-19 situation in the country.

The youthful Senator rose to national politics after he was appointed to chair The National Alliance, President Uhuru Kenyatta’s party that took him to State House in 2013. The move shocked the country since Sakaja was only 28yrs of age by then.

Sakaja was later nominated to the National Assembly before his election as Nairobi Senator in 2017. He has been an ardent supporter of the youths in the country.