PoliticsTrending News
By Correspondent On May 12, 2020 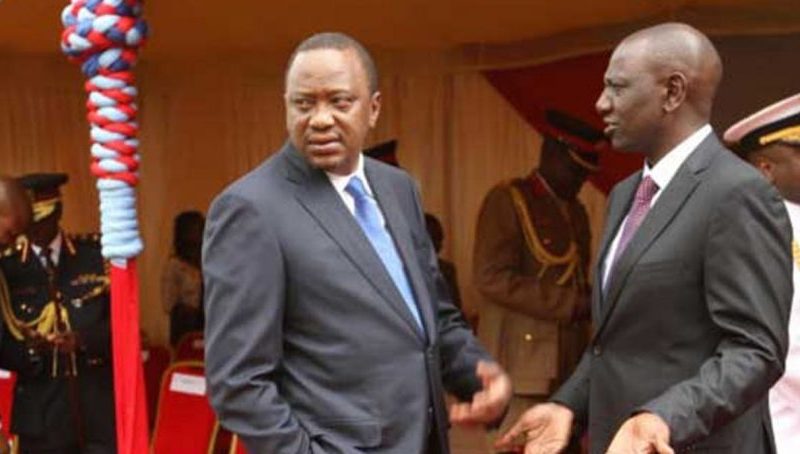 The political partnership between President Uhuru Kenyatta and his deputy William Ruto was left in tatters yesterday after the Head of State kicked out the DP’s allies from key leadership positions in the Senate.

During a Jubilee coalition Parliamentary Group Meeting at State House attended by 20 senators drawn from the ruling party and Kanu, Uhuru proposed radical changes to “strengthen the coalition’s Senate leadership.”

But in a clear case of defiance, Ruto led a group of senators loyal to him to boycott the meeting, perhaps illustrating that his relationship with the Head of State had hit rock bottom.

Political observers were quick to point out that Kanu chairman and Baringo Senator Gideon Moi was a major beneficiary of the purge which saw West Pokot Senator Samuel Poghisio from his party appointed the new Leader of Majority in the Senate.

Ruto’s relationship with the President has been increasingly frosty since the March 9, 2018, Handshake between Uhuru and Opposition leader Raila Odinga.

Nakuru Senator Susan Kihika, who has also been at loggerheads with the President, was axed as Majority Whip and replaced with Murang’a’s Irungu Kang’ata (Jubilee).

Kang’ata has been Kihika’s deputy. However, the move quickly sparked uproar from Ruto’s camp which protested the decision to pick a Kanu senator to replace Murkomen, saying the independence party had no valid agreement with Jubilee.

Indeed, Murkomen swiftly dismissed his and Kihika’s removal as inconsequential.

“This is a big joke that a senator of Kanu was elected Majority Leader. State House is not Jubilee headquarters,” he said.

“There was no invitation extended to any of us, especially 22 Jubilee senators for the meeting at State House. The decision to remove me and Kihika is null and void.”

On her part, Kihika disputed the list of senators provided by State House, saying that Standing Order 19 demands that a majority leader can only be removed by a majority of members.

“No vote was carried out as required by the said Standing Order 19 to remove the Majority Leader and the Majority Whip,” Kihika said in a letter addressed to Senate Speaker Ken Lusaka.

“As a member of the majority party, we wish to state categorically that our party does not have a valid coalition agreement with Kanu,” she said, adding that the coalition agreement was not sanctioned by the relevant party organ, the National Executive Committee (NEC) as required under 32.2 of the party constitution.

Fierce defenders She was making reference to the Jubilee-Kanu pact signed last week and which appeared timed to lay ground for yesterday’s changes.

Kang’ata and Farhiya are ardent members of the Kieleweke faction of the Jubilee Party that fashions itself as fierce defenders of the Uhuru-Raila Handshake that seeks to promote national cohesion.

A statement by State House Spokesperson Kanze Dena-Mararo said the President had congratulated the new Jubilee Coalition Senate leaders and assured them of his support.

The People Daily reliably learned that Poghisio was proposed as Majority Leader by his Nyandarua counterpart Paul Githiomi, seconded by Senator Farhiya and approved unanimously by all members present.

Senator Farhiya, who seconded Poghisio as Majority Leader, was proposed as deputy Majority Whip by Senator Halake Abshiro, as Beth Mugo (Nominated) seconded her and was equally approved unanimously by all members.

After being stripped of their House leadership positions Murkomen and Kihika will now lose their attractive perks, official cars and enhanced security and staff assigned to them.

Some 20 senators attended the State House meeting which was boycotted by Ruto’s allies, but which was reinforced by the new entrants to the Jubilee-Kanu coalition.

However, it clarifies that the removal of a senator from office as Majority Leader shall not take effect until another senator has been elected in the manner provided for.

It is expected that Kang’ata will communicate the Jubilee coalition Parliamentary Group’s decision to Lusaka in writing alongside the list of members who attended and minutes of the meeting that made the decision.

Gideon, Pogishio and Halakhe Waqo (Nominated) of Kanu also attended. Kericho Senator Aaron Cheruiyot disputed the State House list: “You will never see photos of the purported Jubilee Senators PG for the very simple reason that numbers do not lie. Of the 35 Jubilee Senators, 23 kept off. What has befallen the ruling party? Amidst a global health pandemic, we are engaged in such monkey business?” he posed in a tweet.

DP Ruto allies in Trouble as Tribunal confirms section of its orders given to Lusaka on Murkomen, Kihika was forged