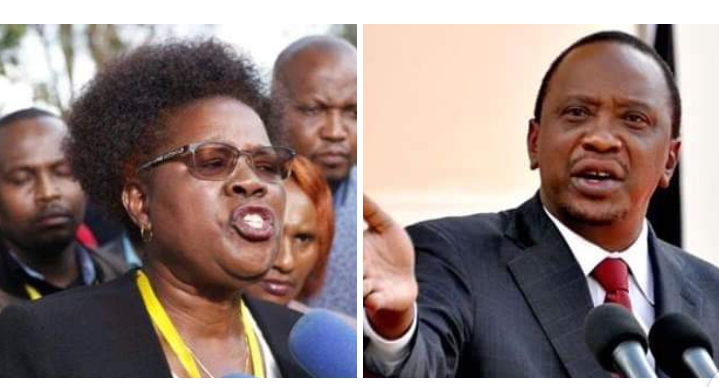 She tweeted, “Mtoto wa Nyoka ni Nyoka. We had forgotten”. When translated it means a child of a snake is a snake.

This was her alluding to the political witch hunt that has been on going in the ruling party Jubilee.

Angry Kenyans on Twitter did not take her remarks well, considering she has been captured on camera harassing an IEBC official before.

I reminded you in 2013 and 2017. But you fed the pet snake! You even wrestled @IEBCKenya officials on his behalf. See your life oo! Mnalilia kwa choo. Enjoy your egg! #UshenziKE!

Translated to you will be disciplined until you respect the president.

Other Kenyans were more brutal in their response.

@ItsTitus wrote, “May the Good Lord above restore your memory, the short term memory you’re experiencing is a resultant effect of too much power you exuberated in your Joseph Kony look-alike General attire. You forgot power is transient and wembe ni ule ule”.

You must finish the journey
Video 🎥 pic.twitter.com/KpPdse5d6g

@petergathua64, “The handouts you get is blood money and it will haunt you and your generations for ever, how can you forget how this many have done to our brothers from yk 92 upto and including 2007/2008? And now is your second bank Account”.

When you guys started insulting your party leader what did you expect? You expected him to just seat and watch as you misbehave?

@ma_shete, “Oyaa, IF YOU WORK FOR A MAN, SPEAK WELL & STAND BY THE INSTITUTION HE REPRESENTS. If you must growl, condemn & eternally find fault – RESIGN but as long as you are part of the institution, DO NOT CONDEMN IT! If you do, the first high wind that comes along will blow you away”.

Respect your party leader! You know you are alleged to misappropriate trust funds of Mbiyu Koinange leaving the children in jeopardy??????!!! When your time comes your colleagues and you will face the law. Kenya needs to drain such old con lawyers and leaders 🚮

😂😂😂 ndio mmegundua? But you told us that Uhuru was the best president to ever happen to this country? What changed along the way? Funga mikanda sawasawa we must finish the journey together

After COVID 19 ni referendum tumuongeze Tano Tena mpaka 2027. We will not waste money on elections yet we have the best president.

Pole Mama. You wish you knew, asante ya punda ni mateke, Imagine you campaigning day and night even to the point of defending stolen victory and after all is said and done those whose victory were stolen watch you in awe as your wailing never ends. Na bado pole @kipmurkomen pic.twitter.com/JZWNz60dz4

Well, the political tension has been heightened by the wrangles in Jubilee.This comes barely a week after Senate Majority leader Kipchumba Murkomen was ousted and replaced with Samuel Poghisio in a meeting convened by Party leader President Uhuru Kenyatta.

Other leaders who are targeted in the next ousters are reported to be Senate Deputy Speaker Kithure Kindiki, Naitonal Assembly Majority Leader Aden Duale and the house’s Majority Whip Benjamin Washiali.