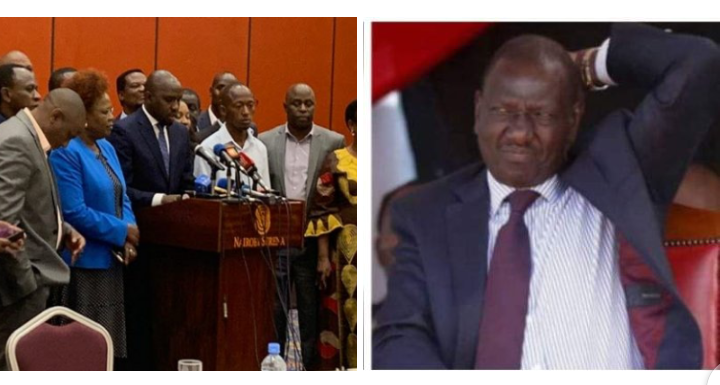 President Uhuru Kenyatta’s to tame the growing discontent within the ruling party over 2022 succession politics has sent shockwaves into Ruto’s camp, with many of DP’s allies making overtures to the President’s camp.

Politicians associated with the President, who spoke to the People Daily, revealed that their opponents, who have been vocal in the pro-Ruto Tanga Tanga group, have been reaching out to them in what appears to be a change of tune in Uhuru’s favour.

Tired of henpecking from the Tanga Tanga camp, President Kenyatta has been on a warpath to restore control of the region and instil party discipline.

Now, some of the most vocal foot soldiers of the DP have faded from the public arena, with some fearing that the President may end up losing their seats in the next General Election.

Uhuru supporter Kieni MP Kanini Kega, a staunch Uhuru supporter, on Tuesday, said some of his counterparts from the DP’s camp have been approaching him for accommodation after Uhuru’s purge started.

“The moderate ones we have welcomed them back. The extremists are still out there and today out of 75 MPs in the region, 62 are behind the President. What are these numbers they keep talking about?” posed Kega.

His Nyeri Town counterpart Ngunjiri Wambugu, said Mt Kenya MPs, who have been drumming up support for the DP’s 2022 presidential ambitions, are “very scared” and some have been approaching him seeking to shift their loyalty.

“Some have confessed that they blindly followed the DP after being misled by a few Tanga Tanga diehards that Ruto and Uhuru were working together and that is why the numbers appeared big. But from what is happening, they have realized they were fighting the wrong battle. I have actually been talking to my colleagues on their behalf so that they can be pardoned,” said the MP, a fierce critic of the DP.

Former Agriculture Cabinet Secretary Mwangi Kiunjuri, who had projected himself as the face of the rebellion in the region and a possible Ruto running mate come 2022, has gone silent despite his declaration that “he was going nowhere” following his sacking late last year.

The People Daily has established that nearly all governors in Mt. Kenya region have now thrown their weight behind the President.

Others who have toned down the pro-Ruto rhetoric include Laikipia Woman Rep Cate Waruguru, Faith Gitau of Nyandarua and Nyeri’s Rahab Mukami.

Dozens of MPS who have been accompanying Ruto to public rallies in Mt. Kenya have also gone silent.

But some of Ruto’s diehards are still in his corner. They include Mathira’s Rigathi Gachagua, Moses Kuria (Gatundu South), Ndindi Nyoro (Kiharu) and Kikuyu’s Kimani Ichung’wa.