REVEALED :Why the Rifts Between Uhuru, Ruto Cannot Be Reconciled-Murathe 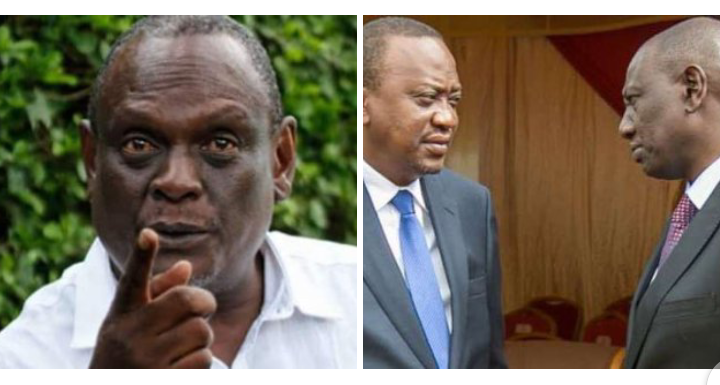 Jubilee party Vice Chairman David Murathe has disclosed that the rifts between President Uhuru Kenyatta and his Deputy William Ruto are irreconcilable.

According to Murathe, DP Ruto openly challenged President Uhuru during the State House parliamentary meeting by asking some Senators to snub the meeting.

Further, Ruto is said to have openly displayed a rebellion against his boss and party leader hence a threat to the President.

“It is not a secret, the DP was actively whipping Senators not to attend. That is the height of insolence, it is unheard of anywhere in the world. That actually is not only defiance but a threat to the President.,” Murathe said to K24.

He added, “It’s like asking the President ‘who do you think you are? You can call for a parliamentary group meeting and I can ask them not to come. Unfortunately, in this case, their numbers did not add up.”

Murathe also dismissed the speculations that Ruto allies were initiating the impeachment of the President, stating that it was not a card on the table.

“This impeachment talk, I can tell you, is not on a card on the table. But as I had stated in an earlier interview, he should be careful with what he wishes for,” he said.

This comes at a time when the rifts in Jubilee Party have escalated leading to the ouster of Kipchumba Murkomen as the majority leader and replace by Kanu’s Samuel Poghisio.

Next on the chopping board is Tharaka Nithi Senator Kithure Kindiki who also snubbed the meeting.

In a different account of events, Gatundu South MP Moses Kuria has stated that the motion to impeach DP Ruto is ready.

According to the controversial lawmaker, the motion was drafted by President Uhuru Kenyatta’s man and Kieni Member of Parliament Kanini Kega.

Speaking at Parliament buildings on Thursday during a press conference by the DP’s allies, Kuria stated that the impeachment plot is a waste of time.

“I know Hon Kanini Kega has a motion ready for the impeachment of DP Ruto. In the mind of Uhuru he fired Ruto along time ago, why are we firing him twice? He has accepted he is just waiting for his term to end. Why bother to impeach someone who is already impeached by design?” the lawmaker posed.
-Kahawatungu.com

Wiper Party to sign deal with Uhuru’s Jubilee and KANU

ATWOLI :The Senate is now in our hands, We are going for their Master – William Ruto.