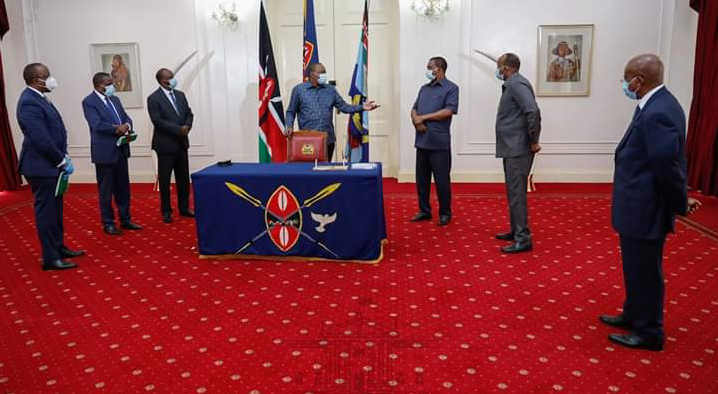 Embattled Garissa Town MP Aden Duale who is also the leader of majority in the National Assembly has met President Uhuru Kenyatta ahead of the highly anticipated leadership changes in Parliament.

Duale whose position is under threat following the recent political uncertainty in the ruling party met with Uhuru (the Jubilee Party leader) at State House, Nairobi on Thursday, May 28.

The vocal MP who has been silent of late, was at the house on the hill to present the Kenya Institute of Curriculum Development (amendment) bill of 2019 which the president signed into law.

The new law mandates KICD to incorporate personal safety and psycho-social skills training in the curricula for basic and tertiary institutions.

The signing ceremony was attended by Speaker of the National Assembly Justin Muturi and Treasury CS Ukur Yattani.

After the recent ouster of Deputy President William Ruto’s allies in the Senate, Uhuru’s axe would be expected to also fall on the DP’s close associates in the National Assembly.

Jubilee Secretary General Raphael Tuju said all disloyal members would not be spared.

“We are not in the business of just issuing threats to people. There is no turning back on the matter of disloyal members. How do you punish some disloyal members but spare others,” Tuju said in reference to rumours Duale could retain his plum position.

Jubilee is expected to hold a Parliamentary Group Meeting on Tuesday, June 2, when the National Assembly reconvenes from a one-month recess.

A section of Kieleweke MPs allied to Uhuru called for Duale to exit alongside exit alongside Majority Chief Whip Benjamin Washiali and his deputy, Nominated MP Cecilly Mbarire.