Trending News
By Correspondent On Jun 2, 2020 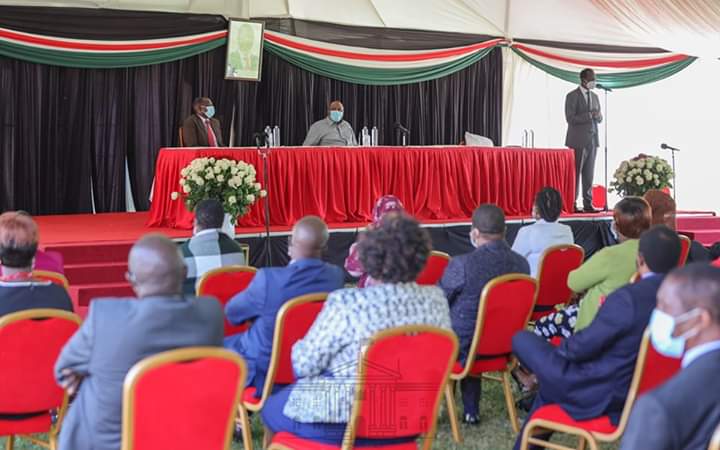 The meeting brought together Jubilee MPs and those also affiliated to the ruling party.

The meeting came barely a month after the Senators’ PG meeting was held at the same venue save for the fact that DP William Ruto and a host of the Tangatanga leader were missing figures at the Senators’ meeting but managed to attend the National Assembly PG.

However, Gatundu South MP Moses Kuria seems to be in a panic mode after President Uhuru delivered a stern message that caught the Tangatanga brigade unaware.

In his message to the Jubilee party members, Uhuru said: “My father taught me that sometimes you unleash the sword, but always remember to secure it in its sheath.”

The message seemingly had a different meaning to Kuria who cited prominent leaders who were assassinated or died mysteriously during the error of President Uhuru’s father, Mzee Jomo Kenyatta.

According to Kuria, the sword that Uhuru said he was taught to unleash will not go back without leaving behind victims who he insinuated could be the Tangatanga brigade that has become an ardent critic of the Uhuru”s leadership.

The Jubilee PG meeting came with its casualties after Mumias East MP Benjamin Washiali was kicked out as Majority Chief whip and replaced with his Navakholo counterpart Emmanuel Wangwe.

Wangwe’s first role is to begin the purge on Committee leadership which are perceived to be frustrating President Uhuru Kenyatta’s implementation of the Big Four agenda.

The Jubilee Purge began at the Senate-Assembly where leaders affiliated to DP Ruto were kicked out plum senate positions.
~Opera news