Trending News
By Correspondent On Jun 4, 2020 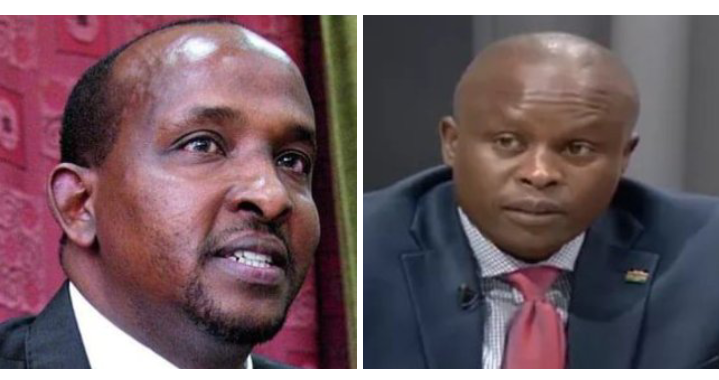 THE STAR :National Assembly Majority Leader Aden Duale who seemed to have survived President Uhuru Kenyatta’s axe on Tuesday is not out of the woods yet.

At least 117 MPs have signed a fresh petition asking President Kenyatta to kick out of the Garissa Town MP from the powerful office of Majority Leader.

A sign of the ruthless power play in Jubilee, there are reports the plot to hound Duale out of office could be have been hatched by a clique of powerful movers and shakers at State House.

The Kieleweke faction of Jubilee who are generally believed to support Kenyatta is furious that Duale survived the Tuesday sacking of key party members from parliamentary roles.

Having seen their months of political campaign come to naught, they started scheming the very minute the State House parliamentary group meeting ended.

They are collecting signatures to petition the President that they have no confidence in Duale.

But Duale said it was unfortunate that the proponents of the petition failed to raise their issues at the State Gouse PG.

“I am used to Kanini Kega’s petitions. He brought two against me in the 11th Parliament but they both flopped. He needs to acquaint himself with the preocedures for appointing and removing parliamentary leaders in accordance with the law,” he said.

The Kielekwe MPs behind the anti-Duale plot claim Kenyatta did not publicly endorse Duale during the Jubilee PG when he read out the names of those he wanted retained.

A statement from State House spokesperson Kanze Dena on Tuesday indicated that the PG had resolved that Duale retains his powerful role as leader of government business in the National Assembly.

This, according to the Kieleweke diehards, was not the case as the matter was allegedly deferred until another PG to be held in two weeks.

Some of the MPs who attended the tense PG confirmed that Kenyatta announced the removal of Benjamin Washiali and Cecily Mbarire but left out Duale to the dismay of the Kieleweke team.

Fafi MP Abdikhaim Osman, who was yesterday whipping Jubilee members to sign up for Duale’s removal, claimed that they were almost hitting 100 signatures.

However, he would not make public the names of the MPs who had signed the petition.

“The President said we spare Speaker Justin Muturi, Deputy Speaker Moses Cheboi and Deputy Majority Leader Jimmy Angwenyi. The President did not tell us to spare him and he never confirmed that Duale continues playing his role,” Osman told the Star.

Osman, who incidentally comes from Northeastern as Duale, said they were not given time to raise their reservations against Duale during the State House PG.

Nyeri Town MP Ngunjiri Wambugu confirmed the collection of signatures but distanced himself from the plot.

“It is on record that I wanted Hon Aden Duale removed as Majority Leader. I have been specific about my reasons. However, the President decided otherwise. Now I understand that there are some MPs who are collecting signatures to remove Hon Aden Duale,” he told the Star yesterday.

Sources told the Star Duale survived the long knives of Tuesday following last-minute talks between the President and his deputy William Ruto hours before the Jubilee coalition parliamentary group meeting at State House.

On Tuesday night, during a TV interview Duale said he is loyal to Kenyatta and was ready to execute his agenda in Parliament.

“In Parliament, we don’t have the Kieleweke or Tangatanga factions. I have developed a good working relationship with each Member of Parliament from all sides,” the Majority Leader said.

To successfully kick out Duale from the powerful position, the proponents of the ouster bid must secure the support of at least 109 MPs of the Jubilee coalition’s 216 members.

The standing orders require that the removal of the Majority Leader or whip must be by a vote supported by more than half of the membership of the largest party or coalition.

Removal of the Majority Leader must be sanctioned by the party.

“The whip of the largest party or coalition of parties in the National Assembly shall forthwith, upon a decision being made under this Standing Order, communicate to the Speaker in writing the decision together with the minutes of the meeting at which the decision was made,” the Standing Order states.

Jubilee Party has 171 MPs while Kanu, which signed a coalition agreement last month, boasts of 10 with the rest coming from other fringe parties in a coalition arrangement with the ruling party.

There was a meeting at Kieni MP Kanini Kega’s KICC office last evening among Kieleweke members who were mobilising to garner the requisite signatures to sack Duale.

Reports indicted that some influential officers from the Office of the President joined them, lifting the lid on high-octane political games involved in Duale’s woes.

Wajir Woman Representative Fatuma Gedi and the new Deputy Majority Whip Maoka Maore (Igembe North) were said to be part of the team that was spearheading Duale’s removal.

When contacted yesterday, Gedi did not directly refer to Duale but said: “The President said there are more changes to follow. Let us wait. We don’t know what that means,” she told the Star.

But Soy MP Caleb Kositany termed the move by Kieleweke to go after Duale as “selfish and uncalled for since the President had not removed him.” The Jubilee deputy secretary general said the team was “harassing members including Independent MPs to append their signatures.”

“If they are indeed executing a clean process, why are they struggling to get signatures? Why are they lying to members and trying to intimidate them to sign the list?,” he told the Star on phone.

It emerged that the Kileweke team was rooting for Eldas MP Adan Keynan while State House wanted Kipipiri MP Amos Kimuya, resulting in a major split that saw emotions run high during the stormy PG.

Edited by Henry MAKORI for The Star