REVEALED:How New Executive Order will effectively make DP Ruto a senior official at the office of The President

NationalTrending News
By Correspondent On Jun 5, 2020 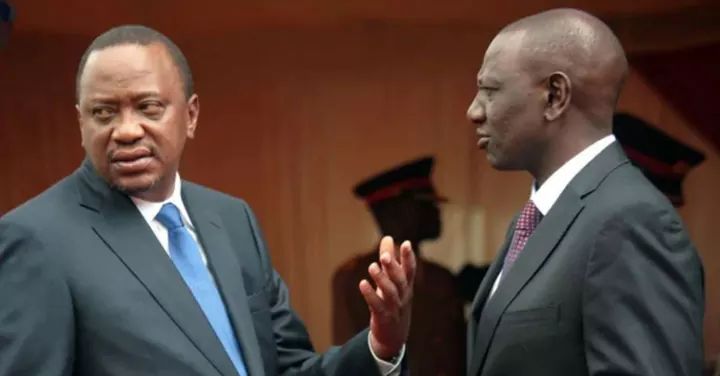 At the Harambee Annex building in Nairobi, visitors are welcomed by a large red-and-white outdoor signage – Office of the Deputy President – on both the ground floor and fifth floor.


While the brightly coloured signage shines during the day and glows at night, the same cannot be said of the holder of the office: Deputy President William Ruto.

Of late, Dr Ruto, and most of his followers, have been subjected to rancorous attacks as the glamour of this office fades away, thanks to incessant attacks within Jubilee Party.

Just recently, two of his ardent supporters, senators Kipchumba Murkomen and Susan Kihika, lost their powerful positions in a palace coup – and more of his allies were this week put on Jubilee’s waiting list; ready for ouster. Among them is Leader of Majority Aden Duale.

When President Uhuru Kenyatta named his first Cabinet in 2013, he created for Dr Ruto an executive wing known as Executive Office of the Deputy President and which was based at the building that previously housed the Office of the Prime Minister, then occupied by ODM chief Raila Odinga. By then, both Mr Kenyatta and Dr Ruto were facing serious crimes against humanity charges at the International Criminal Court and had promised to share power once in office.

The creation of the Executive Office – contained in Executive Order Number 1 of 2013 and which was published on April 13, 2013 – some 10 days before Mr Kenyatta named his first four nominees to the Cabinet, was the first indicator that Kenya would have a powerful Executive Deputy President within the Presidency. It was an experiment, since previously, vice presidents were given specific ministerial portfolios.

In public, there seemed to be tight chemistry between the two, whose dalliance looked unshakeable, and so was the political pretence. Dr Ruto’s United Republican Party (URP), with support in the Rift Valley, had signed a coalition agreement with Mr Kenyatta’s The National Alliance (TNA) to form Jubilee Coalition, a surprise camaraderie that had brought two antagonistic tribes on one side against the Nasa coalition of Mr Odinga.

With Gazette Notice 4961A in place, it was now clear that the powerful Presidency not only included the Executive Office of the President, the Executive Office of the Deputy President, but also two powerful ministries: Interior and Coordination of National Government and that of Devolution and Planning. A third element within The Presidency was the Cabinet Affairs Office, a powerful Constitutional office created under the 2010 Constitution.

President Kenyatta had appointed Francis Kimemia into that position, but after a shortwhile, he was forced to step aside after he was named (he was later cleared) in a graft report released by the Ethics and Anti-Corruption Commission (EACC) in March 2015.

But it was rather surprising when President Kenyatta and Dr Ruto picked a former Utalii College general manager, Joseph ole Lenku, to head the Interior docket and Ms Anne Waiguru, a former director of Integrated Financial Management and Information Systems (IFMIS), to head the powerful Ministry of Devolution and Planning.

Both were not known and, in essence, they could not outshine both Mr Kenyatta and Dr Ruto. They later left under a hail of controversy – but ended up as governors in Kajiado and Kirinyaga respectively.

Interestingly, after Mr Kimemia left, no powerful personality emerged at the Cabinet Office, a position that is superior to that of Head of Public Service. Only one man could fill that gap – Joseph Kinyua.

After his election, President Kenyatta took Mr Kinyua, his PS at the Treasury, and made him the Chief of Staff and Head of Public Service. The departure of Mr Kimemia gave Mr Kinyua a chance to coordinate Cabinet affairs, although in essence he was not designated as Secretary to the Cabinet.

Within State House, Mr Kinyua soon emerged as the voice of reason and as the person Mr Kenyatta trusted most to run the State affairs – playing the role of Francis Muthaura during President Mwai Kibaki’s tenure.

An attempt to name Dr Monica Juma to the position of Secretary to the Cabinet was thwarted by Parliament, which failed to approve the decision, accusing her of arrogance. Ms Juma was the victim of emerging battles within Jubilee.

In subsequent Executive Orders, the Secretary to the Cabinet Office did not feature and the man deputising Mr Kinyua, Stephen Kirogo, a career administrator, was promoted to head the Public Service Commission.

Back at Harambee Annex Office, Dr Ruto’s executive role was felt in the appointment of various heads of parastatals during the Jubilee coalition’s first term, which did not go well with the TNA wing.

In recent changes, some of these have been removed and are facing corruption charges, leading to arguments that the anti-corruption purge was selective. For his part, Dr Ruto has openly accused Director of Criminal Investigations George Kinoti of playing politics in his arrests.

But it is these efforts that have led to the loss of glamour at Harambee Annex – which was in the news early this year after former Cabinet Secretary Rashid Echesa was accused of using the office to defraud two foreigners.

While President Kenyatta did not show his might during his first term, and as he rolled out multibillion-shilling projects, it soon appeared that these projects had been turned into cash cows by the political elite. Insiders say that he had to wait for a second term to run the show.

By creating a new Cabinet office within State House, the President now looks not only keen to make a major appointment to the constitutional position, but also fill a void that has existed ever since Mr Kimemia’s exit.

Being a Constitutional office, the position will be above that of Head of Public Service, now held by Mr Kinyua – a respected insider within Kenyatta’s State House. Although Mr Kinyua has reached retirement age, Mr Kenyatta has not been willing to let him go without a powerful – and reliable – replacement.

In March 2016, President Kenyatta had appointed a Safaricom insider, Mr Nzioka Waita, as the Deputy Chief of Staff in charge of the Presidential Delivery Unit. But in a subsequent reorganisation, Mr Waita was promoted to take over as Chief of Staff, while recently, the Delivery Unit was moved from State House to the Ministry of Interior, where the coordination of government projects is done.

With the current shift in coalition politics and as President Kenyatta continues to build a formidable team, two years to the end of his rule, it is clear that various politicians are lining up for the Kenyatta succession.

Also, the appointment of Amos Kimunya, former Minister for Finance, to become the Secretary to the Jubilee Coalition Group, has brought in a new element in the taming of Dr Ruto. While this position is not provided for in law, it now appears that Mr Kimunya will have much more clout within Parliament since he will be the link between the Executive and the National Assembly and the direct link between party matters and the Party Leader.

But whether the Majority Leader and Majority Whip will be reporting to Mr Kimunya in the new structure was not made clear.

It is these shifts that now help us understand the Kenyatta II State and how he has been crafting the workings of his government and in effect taking away some of the powers that Dr Ruto seemed to have both at the party level and within the Executive.

In the latest Executive Order, the President has also removed the Office of the Government Spokesman as a function of the Interior ministry and created the National Communications Secretariat, which is domiciled at the ICT ministry.

Another new creation is the Kenya National Commission for Culture and Social Services at the Ministry of Culture and Heritage and whose functions were not spelt out. However, the National Archives and the Permanent Presidential Commission on Music have ceased to be proper institutions, but become “functions” within the ministry. The significance of that shift is not yet clear.

The biggest shift, however, was the designation of The Presidency into Executive Office of the President, with Dr Ruto as one of its senior officials. With this move, Mr Kenyatta appears to have removed the glamour that came with a substantive office.

The question now remains: What is President Kenyatta up to?