The Talai clan of Kalenjin community is respected and known for their role in foreseeing and blessing leaders since time immemorial.

It will also be remembered that the same clan prayed for Uhuru Kenyatta, William Ruto and four other Kenyans, then facing the ICC indictment in an event that took place at Kapsabet Stadium during the ICC prayer ralies.

The Clan also blessed the covenant of the political union between URP and TNA at Nakuru Afraha Stadium in 2013 that marked the birth of Jubilee Coalition. 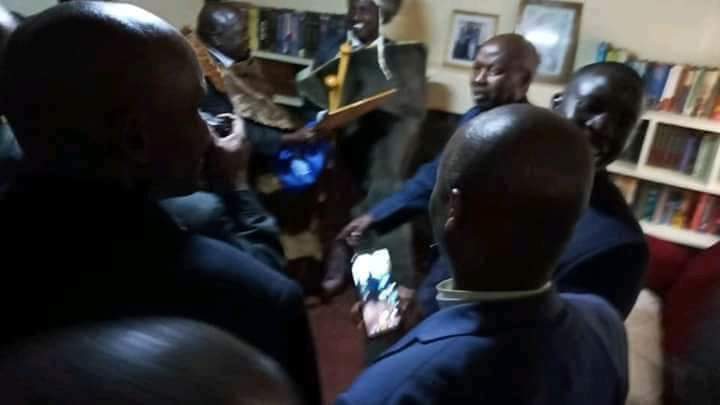 It was at this meeting that Uhuru Kenyatta agreed to establish Koitalel Samoei University in honour of the Kalenjin Supreme leader who led the Nandi resistance to British rule in Kenya and resisted the invasion of their land.

The abdication and accession ceremony in Kalenjin Community.

In the chilly morning of Friday 5th 2020, unknown to many Nandi residents, the Deputy President was their guest.

While the accession prayer ceremony took many by surprise, word has it that preparations preceding this ceremony took several months. Sources among the Talai elders indicated that Governors Sang and Mandago walked with the elders through the detailed preparation process. Soy MP Kositany also played a pivotal role in coordinating the participation of the other members of parliament from the region.

The DP was received by Gov. Sang, Nandi Kaburwo Elders and the Talai Clan elders.

The ceremony was presided over by Rtd. Rev. Canon James Bassi of the Anglican Church among other key Talai Clan elders.

The early morning ceremony started at 6 am and ended shortly before 7 am.

The elders adorned the DP with the sacred Kalenjin leadership regalia namely, Sambut, Kuutwet, Sharit and Rungut. He was also given Kumiat and a Kalenjin bible.

The Sambut and Kuutwet are the sacred accession treasures that are passed to successive Kalenjin community Kingpins.

Sharit is a stuff representing shepherding.

The accession rite through which William Samoei Ruto inherited the Kingship of the community and the country at large and necessitated by the death of Mzee Moi.

According to Kalenjin tradition, one would naturally abdicate the enthronement upon their demise. After Moi’s death, the royal regalia now needed a suitable successor to be handed over to through a legitimate ceremony.

Yesterday’s ceremony was however an abridged version blended with strong Christian/biblical symbols and prayers.

The Kumiat (honey) given to him was a sign of leadership full of abundance and prosperity while the Kalenjin Bible was given in place of traditional shield for protection and safeguard.

During the ceremony, Talai clan also requested the government to fastrack the operationalization of the 10 Billion fund promised by President Uhuru Kenyatta meant to compensate victims of historical injustices in Kenya.

They also asked the DP to push for the implementation of the NLC ruling on the historical land injustices meted on the community by the colonial and post-independence governments to date against their clan.

They also thanked Gov Sang for his unwavering support towards the documentation instituting claims for all injustices the clan had suffered.

The DP promised to continue championing their interests as well as those of other victims of historical injustices across the country.