PoliticsTrending News
By Correspondent On Jun 8, 2020 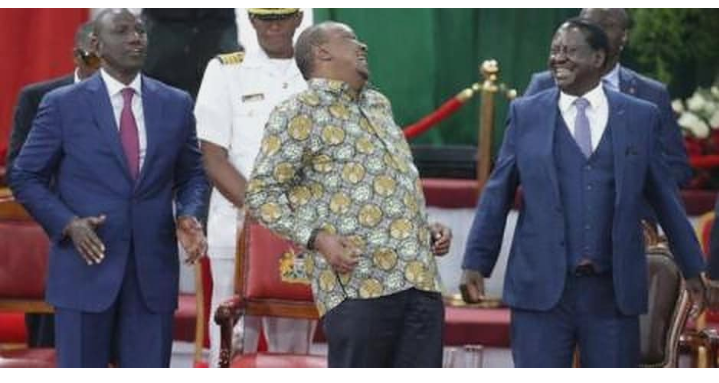 It has now emerged that Uhuru used the occasion to give the strongest hint, yet again, that Ruto was no longer part of his succession plan.

Credible sources divulged that during his animated address, the head of state explained that he had made up his mind on his 2022 political game plan, with strong pointers that Ruto was no longer part of the equation.

According to MPs who attended the meeting that lasted less than an hour, Uhuru compared the ongoing succession politics to a relay race, stating that he initially planned to hand the baton to Ruto at the end of his term.

He was categorical that they had started the race as a team, and that he was set to have them complete it in the same manner.

In a clear reference to Ruto’s premature 2022 campaigns, the president is reported to have expressed anger that instead of his teammate patiently waiting to be handed the baton, he left his position and sprinted backwards to “forcefully get it.

He said it was impossible for one to win in such a race since he would be exhausted.

A furious Uhuru further rebuked the DP and his Tanga Tanga outfit for making his government look like a “seven-headed snake”; a situation he said exemplified a high degree of insubordination and disrespect.

Uhuru’s address appeared to encapsulate his displeasure and subsequent fallout with the DP since 2018.

Ruto embarked on a mission to drum up support for his 2022 campaigns immediately after they won a second term in office.

Uhuru repeatedly warned Ruto against the premature politicking, which he dismissed as kutangatanga (loitering), and pleaded with the DP and his foot soldiers to first help him deliver on his election promises to Kenyans.

But the pleas fell on deaf ears as Ruto defiantly upped his countrywide tours and plunged the country into campaign mode, openly opposing the president’s agenda, including the handshake with Raila Odinga and the war on corruption, as some of his lieutenants openly insulted the head of state.

Uhuru eventually appeared to give up on Ruto, taking the gloves off and gradually trimming his deputy’s influence.

He, early this year, publicly announced that he would no longer send people around him to inspect projects since they have failed him.

Speaking in Nyandarua county, the president said he no longer trusted anyone and that some projects had failed to start because those he used to send to represent him “started behaving like hyenas.”

Uhuru has over the past one month ruthlessly kicked out Ruto’s allies from leadership positions in both houses of Parliament, followed by last week’s Executive Order No. 1 of 2020 that commentators say downgraded the DP’s office and tucked it under the Executive Office of the president.