AfricaTrending News
By Correspondent On Jun 9, 2020 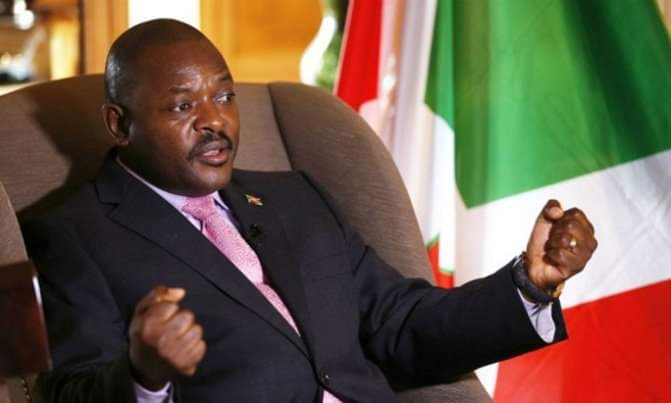 A government statement says that he was admitted to hospital on Saturday after feeling unwell.

His condition then improved but on Monday he had a cardiac arrest and efforts to revive him were unsuccessful.

Mr Nkurunziza was due to step down from the presidency in August after 15 years in power.

According to reports, It is highly likely that Nkrunziza died of Coronavirus and heart attack is allegedly just being used as a cover up.

Outgoing President of Burundi, Pierre Nkurunziza, is a very sick man after he tested positive with #Covid-19

The outgoing first lady Denise Nkurunziza is also reportedly recovering at Aga Khan Hospital in Nairobi, Kenya. “She sent a recorded audio message saying she was responding very well to treatment,” a source said, adding she shared the message on WhatsApp.

Nkurunziza is on record for saying that there was no #Covid-19 in his country and vividly disregarded all measures announced by WHO aimed at stopping the spread of this pandemic.

“Nkurunziza is in the hospital in Karusi suffering from #COVID-19,” a source said.

Burundi just concluded presidential elections on May 20 after a month-long campaign period that exposed millions of citizens to Covid-19 because of no social distancing, no wearing face masks, and not even washing hands.

The top leadership and elite people of the country also did not show any regard for measures against COVID-19 during the campaigns.

Health experts argue that Burundi may be headed for another massive disaster due to community contagion that may have occurred during campaigns.

After waiting since May 20 for the winner of the presidential elections, the constitutional court confirmed on Thursday, June 4, that Maj. Gen. Evariste Ndayishimiye was the new President of the Republic of Burundi.

The constitutional court also rejected an appeal of the presidential candidate Agathon Rwasa of the CNL party.

“Even if these allegations were founded, they could not have had a significant influence on the results of the poll by their low number,” the president of the constitutional court ruled.


The court declared that the candidate of the CNDD-FDD won the ballot with 68, 70%, adding that he is proclaimed president of the Republic for a mandate of 7 years. According to the constitutional court, the winner of the presidential election will take office after the swearing-in.