Angry Kenyans on social media have flocked Raila Odinga’s comment section telling him off over his message of condolences to the family of the late queen of Ohangla music lady Maureen.

Most Kenyans seemed angered by the fact that when the singer was sick and suffering in hospital,Raila Odinga never came to her help and therefore his message brings no difference to the family of the late.

“They don’t care when you’re battling a disease but will be the first to say RIP when you die,” @one Kenyan commented to Raila’s post.

Through his Twitter account, the former Prime Minister had sent out a message of sympathy and goodwill to Lady Maureen’s family noting that she was a talented and a dynamic Kenyan artist.

“My condolences go out to the family, friends and fans of Lady Maureen. Achieng’ was immensely talented and very dynamic; always adapting to new trends in a very competitive music industry. May she Rest In Eternal Peace.” @Raila Odinga’s message to the family reads. 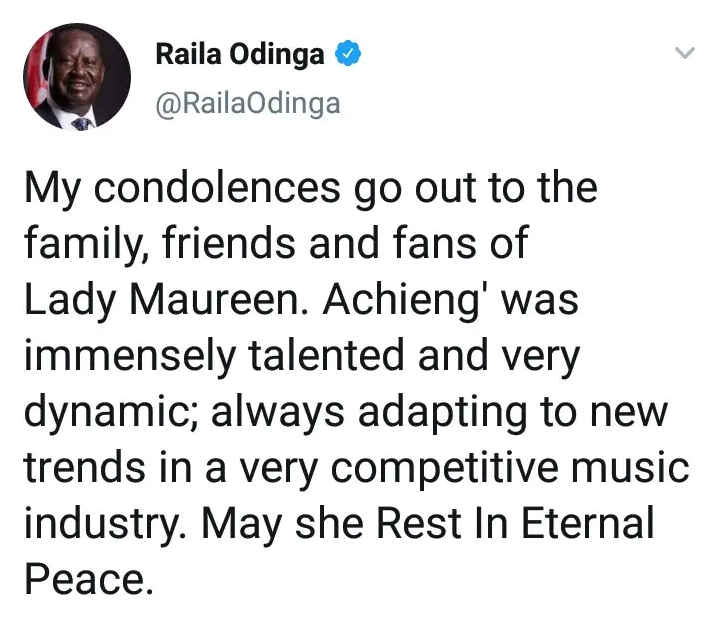 Other Kenyans have faulted his selective and biasness in sending out messages of condolences noting that when another Ohangra musician Benny passed on, he never sent out any message to the family.

“Wewe Raila sio mtu poa,, ungepeleka lady Maureen hata Agakhan atibiwe,,, just some love & care for her well-being would have raised her spirits.Neglected by family & abandoned by the people she used to entertain like you,, she didn’t die of sickness, she’s died of ANGER” @Mkwale said

“Raila has no time for poor He dishes with the rich the like of Tecra Muigai family.He is concerned with #BBIFraud and ranting Ruto is Corrupt the same guy he used to sing day and night during 2007” @MKenyan

“You just boarded a private jet to Dubai and waited to type RIP for your poor fellow luos.Bure kabisa” @Sammy

Leadership can be taught and learned Jack Ma