Corridors of PowerTrending News
By Correspondent On Jul 20, 2020

Police on Saturday evening launched a manhunt for Nairobi county senator Johnson Sakaja who had gone missing hours after being released on free police bond.

Sakaja had been arrested on Friday midnight while drinking at Ladies’ Lounge in Nairobi and was supposed to be charged with flouting covid-19 rules.

He spent the night in police custody and was released on Saturday morning on free police bond but asked to return later in the day to record the statement. Two staffs at Ladies’ Lounge had also been arrested.

However, senator Sakaja disappeared thereafter failing to show up to record a statement as required. This was brought into public limelight by renowned city lawyer Cliff Ombeta who announced that senator Sakaja had disappeared and asked netizens to help track him.

Lawyer Cliff Ombetsa was at the same police station to secure the release of his clients; the two Ladies’ Lounge staff who had been arrested alongside senator Johnson Sakaja.

Man faints after loosing sh15k bet between Nigeria and Tunisia

Kenyan passport ranked in 71st position,Kenyans can travel to 72…

Before disappearing, senator Sakaja had refuted claims that he had been arrested even when there was a video circulating online of him in police custody. He took to social media to deny any arrest while demanding an OB as evidence.

“Never been arrested. Won’t be. Show me an OB Number,” shared senator Johnson Sakaja on twitter.

According to The Standard, senator Sakaja has finally been traced to a posh Karen home of a top government official where he was hiding. The Monday Standard reports that the police had visited Sakaja’s home after he went missing only to find his car in the parking lot and his phone abandoned in the house; the senator was nowhere to be found. 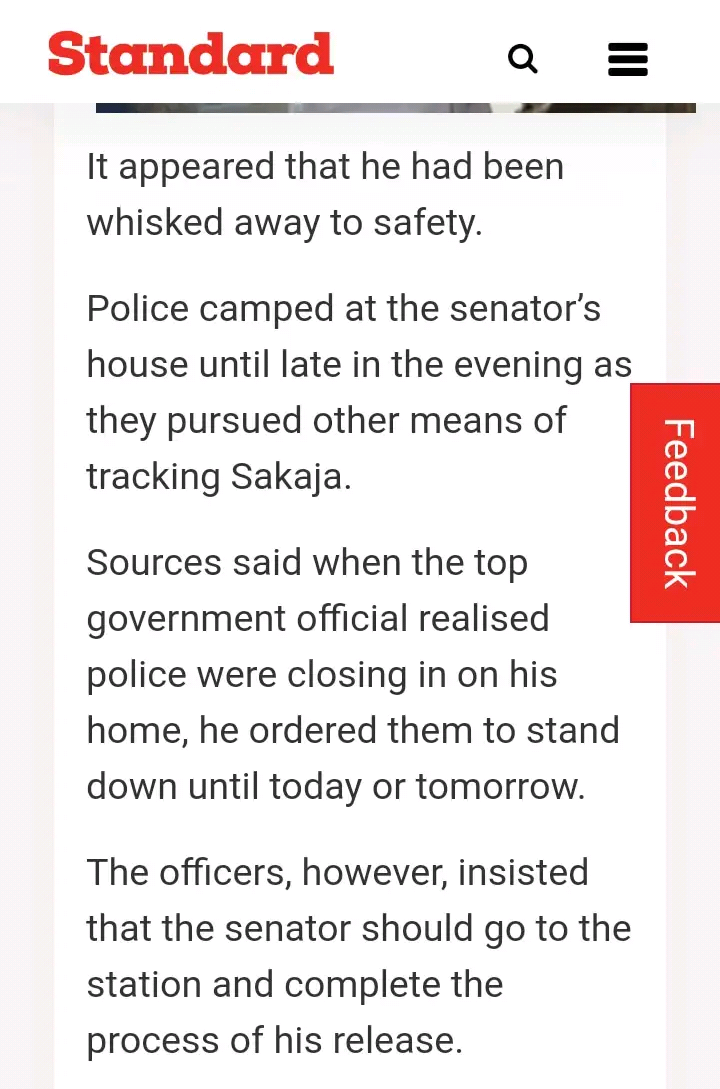 The Standard further states that the police started tracking senator Sakaja using other means. However, when the neared on him, the government official who had offered Senator Sakaja a safe hiding place came out and ordered the police to stand down till Monday. Nairobi police boss Philip Ndolo had early on started that senator Sakaja might not be charged with flouting covid-19 regulations. He argued that not all cases needed to be charged in court and senator Johnson Sakaja’s case was one of them.
Read The Original Article on

Woman shot her boyfriend because he refused to argue with her

Man faints after loosing sh15k bet between Nigeria and Tunisia

Kenyan passport ranked in 71st position,Kenyans can travel to 72…