Father takes daughter to hospital after raping her

CrimeTrending News
By Correspondent On Jul 28, 2020 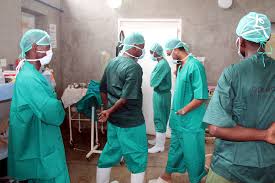 A six-year-old girl is fighting for her life at the Hola Referral Hospital after she was said to have been defiled by her biological father.

The minor was brought in by her parents who claimed that she was hurt while playing with a stick.

However, investigations later revealed that the parents had concocted the story to save her father’s face.

Chief Reproductive Health Officer Hawaa Abdigafoor told the Nation that the minor was admitted with second degree tears and had lost a lot of blood prior to admission.

“She was brought in in a serious condition, had lost a lot of blood and was in deep pain. So we did the best we could and later interrogated the situation privately,” she said.

According to Hola Police Base Commander Peter Ekuthi, the girl revealed that her father paid her Sh100 to stick to the narrative that her injuries were as a result of playing.

“The girl revealed to our gender officer that her father was the cause of her misery, and had threatened her with death if she revealed the truth,” he added.

Children’s Officer Maria Mbote confirmed that her conversation with the minor yielded the defilement story despite the mother’s insistence that the injuries were from playing with a stick.

The man in his mid 40s, only identified as Gavava, has since been arrested by the police pending investigations.

He will be arraigned in court for plea.