Drama erupted at the railways huduma centre Nairobi when a middle aged woman believed to be an adherent of prophet Owour repentance and holiness ministries did the unthinkable.

A witness narrated how the prophet owour’s follower reprimanded the poorly dressed lady reminding her to dress decently. 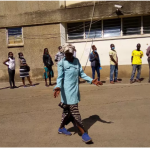 The victim who was visibly embarrassed left the queue hurriedly after the onslaught became unbearable.She was reminded of hell fire which is made up of sulphur if she continued with her earthly ways.

After the victim left,the lady continue telling everyone to repent their sins as the doomsday is around the corner.She went ahead to claim that the covid 19 virus is a clear sign of endtimes. 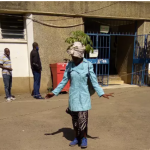 She soon rejoined the rest and waited patiently for turn to be served as if nothing had happened.

Repentance and Holiness Ministry led by self proclaimed Mighty prophet David Owuor are known to adhere to a strict code of dressing shunning many things ordinary people indulge in.According to them,the world is coming to an end sooner than expected.
-Source