PoliticsTrending News
By Correspondent On Sep 21, 2020

According to the KANU Secretary General, all the independence party members across the country, particularly in Bomet should rally behind Raila’s presidential bid and his move to ensure that unity endeavors advocated for in the Building Bridges Initiative (BBI) succeeds.

The vocal politician hailed the former prime minister for his ability to pull large crowds in public meetings and rallies. He likened the ODM leader to the biblical Goliath and David to illustrate his leadership formidability and humility respectively.

He argued that the residents of his Bomet home turf would offer Raila an absolute support in a bid to ensure BBI report sails through to the implementation phase and also, rally behind his politician journey.

“There is only one tailor for Crowds, north of Limpopo south of Sahara, and that is his enigma Rt.Hon Raila Amolo. He is a mixture of David and Goliath when it comes to politics. He is currently on BBI wheel and we agreed unanimously as Bomet residents to support him at all costs,” said Salat on a Sunday Facebook post. 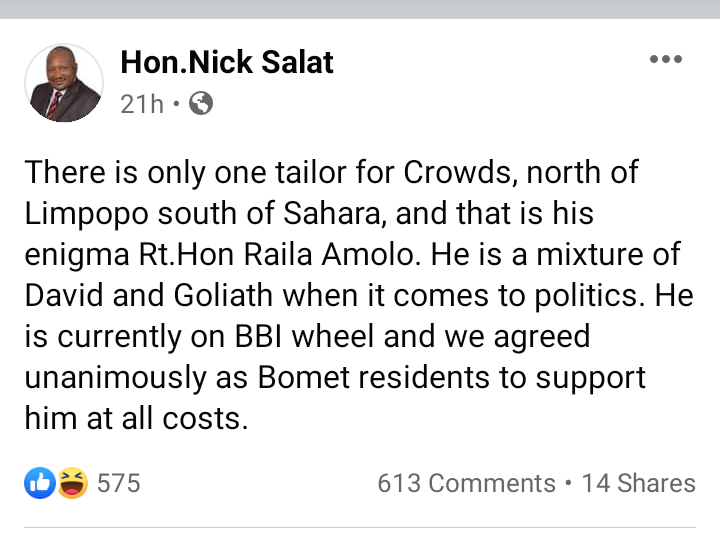 This follows after Raila Odinga visited the outspoken unionist Wilson Sossion in his Bomet home on Saturday and later on, addressed a public gathering where he popularized the Building Bridges Initiative (BBI).

Raila has also started addressing the public on the need to support the BBI report, through roadside rallies, where he, has been attracting large crowds of people who wanted to hear what he had to say.