Blogger Dennis Itumbi was on Sunday, January 16, 2022, forced to delete a photo that he claimed was taken from Deputy President William Ruto’s rally in Embakasi.

Itumbi shared the photo of the huge crowd with the caption, “When people run out of ideas, they settle for violence! Uoga hatutanunua! Importantly, DP William Samoei Ruto was in Embakasi earlier today (Sunday, 16/01/22) and the pictures of support speak louder than the stones and violence!

But what left Kenyans talking is the photo of a huge crowd that was shared by the DP’s Blogger Denis Itumbi.

However, it did not take long before Kenyans called him out of the photo which was taken from a religious rally.

An image search of the photo on Google shows that the photo is taken in Nigeria during a rally by the late Reinhard Bonke who is the Founder of Christ for all Nations (CfaN) church.

The photo which was lifted from CfaN website has been misused many times to give the impression of huge crowds by political organisations and other churches as well. 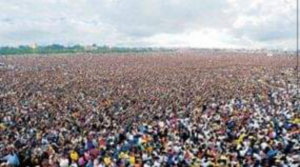 In 2000, over 6 million Christians attended Bonke’s 5-day rally in Lagos Nigeria, making him one of the most popular religious leaders in Africa.

After being called out for posting the misleading photo, Itumbi deleted the post and replaced it with other photos of the Embakasi rally.

The images had photos of DP Ruto addressing the crowd but a number of Kenyans accused the blogger of digitally manipulating the photos.

Shaffie Weru: How I Became Alcoholic After Being Fired From Top Tv Job