Raila Odinga’s chief agent in the last presidential election Saitabao Ole Kanchory has poked holes in the Azimio la Umoja – One Kenya coalition leader’s strategy amid claims that the opposition chief was rigged out in the poll.

Kanchory took a swipe at the ODM leader on Monday evening, hours after the Azimio leader led opposition troops to Kamukunji Grounds to protest alleged electoral malpractice in the elections held on August 9, 2022.

The chief agent indicated that the former Prime Minister failed to give his supporters a clear forward during the Monday afternoon engagement.

He said Raila should come clean on his plans or hold his peace, adding that “Kenyans don’t have time for silly games.”

“Baba Raila Odinga should give a clear way forward or hold his peace. Kenyans don’t have time for silly games,” Kanchory said in a tweet.

Baba @RailaOdinga should give a clear way forward or hold his peace. Kenyans don’t have time for silly games

Kanchory has been critical of Azimio’s recent activities following an apparent fallout with the coalition’s top brass on the management of the coalition’s affairs during the electioneering period.

Earlier, Raila rejected the outcome of the elections, saying he has evidence to believe that he won by more than two million votes.

The opposition leader said they do not recognise President William Ruto as the President of Kenya and that the Kenya Kwanza government is illegitimate.

He claimed Ruto was rigged in a wider scheme involving the outgoing chairman of the Independent Electoral and Boundaries Commission (IEBC) chairman Wafula Chebukati.

“I commend all Kenyans who carried out the sacred and patriotic duty and cast their ballot peacefully. You expected IEBC to transmit, tally and announce the results in accordance with the law, free of bias and corruption. But IEBC and the then chairman Wafula Chebukati and two commissioners Abdi Guliye and Boya Molu and CEO Marjan Hussein Marjan formed a cartel within IEBC to the exclusion of four new commissioners, disregarded the votes you cast and cooked their own results,” Raila said.

“The presidential results announced unilaterally by Mr Chebukati on August 15 were entirely made up by him and had nothing to do with the votes you cast.”

According to Raila, the Supreme Court was captured by cartels and made to dismiss his petition challenging Ruto’s victory as Kenya’s fifth President.

Raila said IEBC whistleblowers had confirmed to the Azimio team that the coalition won with a landslide.

He demanded the entire infrastructure, records of the 2022 elections in the IEBC be made public and audited by an impartial body.

Raila also said the opposition rejects any attempts to constitute IEBC, saying the Kenya Kwanza government is keen to rig the 2027 elections.

At the same time, Raila called on Kenyans to resist and demand the removal of punitive taxes and services including unga, milk, sugar, school books, fuel and electricity.

He said the Kenya Kwanza administration should resign, saying it has neither the mandate nor the ability to govern the country.

“We ask our people to say no to the UDA (United Democratic Alliance) regime. This regime and its unfortunate and unfair policy must be resisted and the resistance starts today,” he added.

Raila returned to Kenya from South Africa on Monday afternoon and headed straight to Kamukunji Grounds to address a recent ‘whistleblower report on the alleged manipulation of the August 9th elections results in favour of President Ruto.

"That's Not Me"~Azziad Nasenya Distances Herself From Viral Leaked Video

List of students who scored A and Their schools 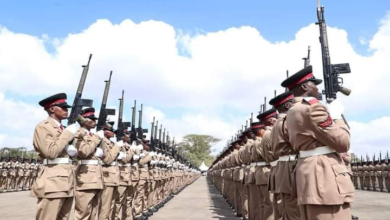